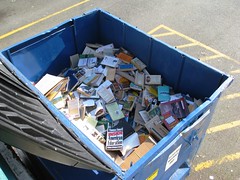 American Education is in the Dumpster (Photo credit: brewbooks)

There is an article in the Guardian, titled: “Advent of Google means we must rethink our approach to education”

I generally agree with the premise that we could change the education process, but I think this article is somewhat skewed.

1) There is a difference between replication and synthesis of knowledge. It might be OK for the vast majority of the population to be unable to think for themselves and just rely on others to do their thinking for them, but – for example Stephen Hawking cannot google his findings, before he discovers them. In order to push experimental physics forward, he needs to to understand the theory behind it and in order to do that, he needs to be familiar with it and perhaps not on the level of Wikipedia (my additional question is – what if Wikipedia packs it in after an unsuccessful funding campaign? What happens with all functionally illiterate people who have not written a wiki page in their life, and, honestly, also couldn’t write it to save their life, if all they can do is to replicate what is already there). My point here being that it is just fine if a person is literate and can multiply 6 by 7 without using either pen and paper or a mobile phone. And, oh horror, you need to learn this by heart. How the hell would making people completely and uncritically reliant on technology make them more advanced? The suggestions here seem to me to lead to the absurd position where, in order to read a webpage, you would need to consult somebody who could actually read (for example, the village seer). And how is this progress? And what happens when the last of the ancient folks who still learned how to read, dies?

To keep Stephen Hawking out of this mess – what about a more personal example? I use a bibliographic manager for referencing. I don’t penalize my students if they use it in their essays, but I certainly do not encourage it and I don’t tell them that software like that exists (and they mostly don’t know it does). Why? It is not because I am a sadist pig bent on making these poor kids suffer. It is because I know how to cite without help from software. As a consequence of this ability, I can tell when my bibliographic manager gets something wrong (sometimes it does) and I can fix the mistake, because I know how to do it correctly, by hand. And my students don’t. Yet.  If they start by using crutches from the get go they will never be able to rely on their knowledge and ability. What happens if the referencing manager they use stops being actively developed and disappears from the market? What if it changes significantly? The students ability to produce academic writing will be severely impaired. My won’t, though.

You see this is not even the difference between being able to adequately play Bach’s Brandeburg concerto nr. 1,  and composing the said concerto. It is actually the difference between learning to play every note by listening to the composition and watching youtube videos on how to do it; and being able to read musical notation. I am not even at the creative part yet, I am saying that getting people to read digests and summaries of stuff and making them believe that this is all there is to human knowledge, is sad and misguided.

I am talking, therefore, about blind faith in technology and about reliance on somebody else’s ability to think. I am talking about Google search algorithms that are not necessarily constructed in a way which would give you optimal results, but are more probably constructed in a way that maximizes profits for Google. Lots has been written about that. But, hey, people educated in a way proposed by Sugata Mitra will never know about it, because they will be learning about freaking mobile phones, when they are nine years old. I realize I am simplifying a bit.

2) Mitra writes about how the teacher encourages kids to learn through situation and through interaction in-group and over the Internet. Well. My question is – does the teacher study the subject they teach in a classical manner or do they also simply Google it during class? Ok, how does this work? In the Guardian Column the subject is signals in mobile telephony and the teacher starts by having students look at electromagnetism. How can you make sure that the teacher will start with electromagnetism? Does the teacher even know about the connection? Where from? Isn’t this a case of blind leading the blind? If the teacher actually has a semblance of knowledge about the subject they teach, are we then saying that some people should be educated and some don’t have to be? Are we saying that it is suddenly not a problem that some people will be left uneducated? And is the idea that I as a parent should decide that my kid will be left to do menial jobs, where the ability to reproduce, but not actually create will be the only thing required? I think testing the validty of  this idea would be quite simple – I propose two observational experiments:

a) Let us see whether Sugata Mitra is content to let his kids not have a classical education but are instead taught how to google and how to wait for others to come up with ideas (i.e. work in a team, where individual performance is not assessed and where the accolade is shared regardless of input).

3) What the Mitra does not seem to get is that teamwork is effective when people in the team are capable of independent thought, not when they all wait for somebody else to provide an idea. Clueless people in a group are a herd, not a synergy. That is not progress, it is a regression. If you skip the step of enabling people to be creative on their own, you will only get drones. And I am not content to do this to my kid.

4) There is a nice slant to this – These kinds of programs are run out of UK into India and Africa. The underlying current is that the kids there are not expected to attend top level UK Universities or prep schools in the first place. Thus, you see, these kids are ripe to be experimented on. This will not be foisted on British kids, oh no, but these poor savages deserve their chance, right? They will never be as good as us, but they are good for a few papers and for the feeling that we are doing something  good for them. Oh wait, there could also be a grant in this. Right?

We'll do this later
View all posts by David Modic (admin) →
This entry was posted in education, ENG, Izobraževanje. Bookmark the permalink.