About fleecing them for all they’re worth 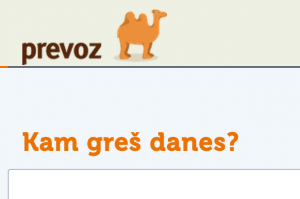 There is an initiative by the Slovene Tax Authorities to tax … carpooling, essentially. Here is the link to the article (in Slovene language): dnevnik.si

There is a platform similar to uber operating in Slovenia. People advertise where they will be going and how much they would charge and others accept those offers. And so people cover a percentage of the petrol cost for the original driver, lower the overall emissions and engage in a service which helps those who are socially less fortunate.

It turns out that the Slovene Tax authorities want in on that action. The official explanation is that the passengers need to pay tax, since they are essentially paying for petrol and and there is a petrol tax that needs to be accounted for.

Predictably this elicited an angry response by pundits on the street. There were criticisms along the lines of: “Those greedy swines, once they smell money, they quickly suck it out of regular people” and “First they bleed us dry and leave us no alternative but to engage in secondary adjustment, because we can’t afford to go on a bus or train, and instead of making public transport more accessible, they tax our adjustment strategy”.

But it makes me wonder. It seems to me that they are after people’s money, but how far have they thought this through?

OK. So petrol dues need to be paid according to the tax authority rationale. The dues were paid by the driver already at the gas station. It seems that the tax authorities are proposing to either (a) have people pay the same tax twice, or (b) pay it once, but at the time of hitching the ride.

Because (a) is clearly illegal, I’ll chose to believe that they meant (b). How are they hoping to enforce this? It seems to be highly elaborate scheme that is completely un-implementable. Let’s play around with this scenario – I arrive at the petrol station, fill up and then claim that I will be driving people around so I don’t want to pay petrol dues? Will the person at the till be accommodating or not? Let’s assume they are familiar with the scheme, and let’s say they do accept my claim. Is it not likely that they would ask me what proportion of the tank I will be using for driving people around and what proportion will I be using for myself in order to calculate the proper amount of tax? How would I know? Why wouldn’t I say that I would be driving people around all the time and thus no need to pay the tax now?

So, I don’t pay any dues, but when people accept my offer on prevozi.org, I then submit the required amount to the tax authorities? Wouldn’t it be the best incentive for me to not offer any rides and thus pay no petrol dues but have full mobility? Will they be keeping track of people like me and follow-up if I do this? Let’s calculate the costs and round them up.

(a) The Tax Authority will need, at the very least, to change the tax software in order to add a table which will keep track of when any Slovene national bought petrol, how much, and whether they paid dues. In addition they will need a table populated by a script which would scrape prevozi.org + gather personal data, where it would be clear when any person offered a raid, how much they wanted, what car they drive (to calculate average mpg for that particular model, vintage and mileage) and the destination.   From that they could calculate the amount of petrol that was used and the amount of dues needed to be paid.

Then they would need let’s say 5 full time employees who would  keep track of two million people and their transactions on prevozi.org. Let’s say their average salary is 1000 EUR per month + contributions which would come to about 2200 EUR per month. This comes to 5 * 12 * 2,200 = 132,000 EUR per year

So, what happens here is that the Slovene government would be spending 150k Euro to get people to pay taxes they would already be paying if things stay the way they are right now.

Ah, I hear you say, but what if taxes are paid in addition to already existing taxes. Well, the cost of the project stays roughly similar, but let’s say we need a few less people and a simplified software package. Let’s say, back of the napkin calculation, that it would cost half of the initial budget, so roughly 75,000 EUR.

Let’s assume that the drivers would be paying 30% of their earnings. And let’s go ahead and assume that people will not cheat and that they will not raise their prices and that, as a result, those looking for service will not make other arrangements. This is a tall order, but let’s pretend that supply-demand curve is not actually a curve (as probably the Tax Authority assumes).

Today, in June 2014, there seems to be 810 offers for today to various destinations. Mostly going to Ljubljana. The average price is 4.6 EUR per ride, depending on the distance, prices go from 2 to 10 EUR. Let’s assume that half of the rides are taken and let’s assume that the price does not influence the preferences. So, the takings per day are approximately 1,800 EUR. Let’s assume that there is a certain amount of fluctuation per day but that this averages out. 30% of 1,800 EUR comes to 540 EUR per day, which comes to 197,000 EUR per year. That means, after taking away the project costs, 122.000 EUR profit per year.

This is peanuts. Slovenia’s GDP is (according to Wikipedia) roughly 41 billion EUR. The profit would amount to about 0.0003% of the GDP. There are two things to think about here, considering how this money is in the realm of a rounding error in the overall GDP: (1) Why do the tax authorities bother with this money, and why do they consider it worthwhile to upset a large amount of people and (2) why do people allow themselves to be upset over such miniscule amounts.

I think the answers are: (1) The Tax Authorities do not do any kind of research, they just see a niche and think of exploiting it, without any in-depth analysis of what they would gain in financial terms, and what they would lose in terms of trust and reputation.

(2) People get upset not because of money, but because they feel screwed. They feel screwed because they came up with this cool thing that helps them and makes their lives more bearable and now somebody wants to take it away or wants to profit from it without any kind of previous participation. This has mostly to do with the psychological contract (i.e. the informal, non-written expectations we have when we sign a formal contract. For example when we enrol into a University, the contract we sign with them specifies that said University will give you an opportunity to learn and earn a degree. However, our expectations may be to learn from great scholars, gain some personal reputation from the reputation of the University, and be better positioned in the job market because we went to a high prestige University). Our expectations are not necessarily written down. This is the psychological contract bit. For our money, we get the service but also want our expectations to fulfilled.

The psychological expectation in the contract we have with the State is that it will help us out when times are tough and we will help it when we are doing OK. When the government does not help but actively deters people who think of ways to help themselves, this constitutes a clear breach of the psychological contract. And that is what angers us. And the government is angry when the people are doing OK, but fail to help out the country. It is like two kids standing on their own hillocks and screaming about the other not wanting to play ball.

The classical economists would think about incentivising people to pay taxes, but they would not think about why they are failing to pay taxes (if they are) in the first instance. This is an old dilemma of inventing ways to force people to do something they don’t want to do vs. changing their frame of mind and making them want to pay taxes. The assumptions are problematic here.

An economist is likely to tell you that people are egotistical and that there is no incentive for them to be “good” and “moral”. This statement is based on the idea that there are no morals, there is no consideration of future consequences of ones actions, etc. It is embodied by the homo homini lupus concept. There are many of us, who disagree with that life philosophy.

At the same time, we know that lack of premeditation leads us to do foolish things. In a recent study we did here at Cambridge, on susceptibility to persuasion, the ability to consider future consequences (i.e. premeditation) accounts for 25% of the variance in scam compliance. Simply put – the ability to consider what will likely happen if you engage with a scammer plays a decisive role in one quarter of the observed cases. (see: https://papers.ssrn.com/sol3/papers.cfm?abstract_id=2446971) if you want to know more about this.

We'll do this later
View all posts by David Modic (admin) →
This entry was posted in ENG, work. Bookmark the permalink.