Brexit postmortem as it is happening 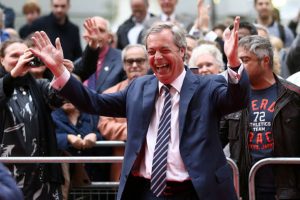 Well. Hard to say anything really. I was ambivalent before and still am. On one hand I am childishly expecting the screws to start tightening, on another I still cannot believe someone could be so insane. The markets are plummeting and will continue to do so.

To spell it out what Brexit means:

Now, it seems that the English are googling what the possible effects of the leave might be and [sic] what is the EU.

Apart from the obvious irony, I am also bitterly amused by the fact that people need to google what is going on. This can be compared to sitting at home and instead of looking through the window, surfing the Internet to find out what the weather is like. What do you mean “What is going to happen?” It has already started happenning. 2 trillion dollars have been lost in a day, the pound was in free fall, reaching the 1985 levels. Pension schemes are crashing. Tens of thousands of jobs lost in the City alone. And now you wonder what is going on?

Seriously, you wonder what is going to happen? It is already happening, just look outside. England is pushing the world towards recession and if we are lucky, only England will crash and burn, and if we are not, the world will stagger too.

I am angry. I did not realize it before, but we went to the theatre on Saturday and there were several short pieces presented. One of them was about American yokels coming to England and buying National Trust properties. There were passing references to how stupid Donald Drumpf is and I just got more and more upset.

And I did not understand why at first. Then it occurred to me, that the English have lost the right to pretend how suave and “better” they are compared to backwards tribes coming from the rest of the world. After fucking up the world because most of the country got scammed by a few people who seriously lined their pockets on the backs of others, you do not get to feel superior in any way, shape, or form.

After destroying the future of your younger generation, who will now need passports and will be checked at the customs every time they leave the country; the generation who will not be able to freely flow between European Universities on the back of Erasmus, you do not get to call anybody else backward. Are we clear?

Bah, I am upset yes. The smugness did not bother me before, because I bought into it in a sense, but now it is just jarring. Only now you wonder what is going to happen? Truly, some people just want to watch the world burn.

Many of our family friends are apologetic, they tell us they are ashamed and that they are sorry, etc. I tend to ignore this, because there is nothing I can say, really. We are in the same boat up to a point. Only theirs will be rapidly taking on water, and I will still have a European passport in the end. What can I say? “Sure, thank you for fucking up my job prospects? Thank you for making me uproot my child and her losing all her friends? I completely understand that you have fucked everyone over in the name of the illusions of old grandeur?” Should I say: “I know you voted remain, so no need to apologize, we’ll weather this together?” How will that help? Just bloody stop apologizing, since we are both screwed. We are now both living in a country where foreign people get abused the street (no seriously, it is already happening) and where MP’s get shot in the face (and then Nigel says that the leave campaign has won without a shot being fired). We are living in a country that did not deem fit to educate itself about what a colossal fuck-up they were going to commit. Why are you apologizing to me? It is not your fault, and we are both screwed. Apologize to your children, that would perhaps be more effective. Why don’t you explain to them how it was in the past, when we all still had a dream. A shabby and sub-optimal dream of a united continent with free flow of culture and knowledge, but a dream nonetheless. A dream that your nation has seen fit to take behind the shed and shoot in the head. Why don’t you explain the logic behind that to your children?

Why don’t you start the story by saying: “Once upon a time, there was a nation, where people believed in abolishing borders, and equality across gender, race or creed, but we preferred to cling to old glory, and decided to flip them off. We thought the nation would still pine for us and do everything they could for us to remain friends, but for some reason they treated the divorce as a divorce, and not as a master-servant relationship. Now, love, please let me extinguish the candle as energy sources have become expensive since we left the common market.”

How fucking stupid do you have to be to post comments along the lines of:

You LOST. Get it? A majority of the British people disagreed with you and you LOST.

The only change – and it will not come in any great rush – is that the UK will extricate itself from the EU’s extraordinary and opaque system of legislation.

Seriously? What kind of delusion you need to be living under to believe this crap? The Remain campaign lost and Leavers won? I’ve got news for you. You both LOST. We all lost. You continue losing about a month and a half of EU subsidies PER DAY. How, in your wildest dreams, do you see this as victory?

The UK will extricate itself from the EU laws? Well fine, (a) one option is to become like Norway, who has to accept all the laws from EU without a seat at the table. Ask the Norwegians how comfortable it is to have to accept Schengen after they said they did not want to. The EU just told them that this was not a request and faxed them the new rules. Want to be part of the common market? These are the conditions.

The other option is (b) to extricate itself completely. Fine, but do not live under the illusion of accessing the common market then. The commentators and Leavers say that UK is exporting 45% of its goods to EU and therefore EU will need to give them a good deal. This is a bit of putting a cart before the horse. I am betting that right now EU officials are meeting with Canada, US and all other friends and telling them that they have an opportunity to get a 0% tariff on importing to EU if they act now. 45% of UK exports are not the same as 45% of EU imports, see? It is not the UK holding the EU by the balls, but rather the opposite.

I am so interested to see how the government proceeds now. If they stop paying EU subsidies, the EU will invoke article 27 which is in place if a member state does not fulfill its obligations and that will screw UK immediately. If they do continue to pay, the only thing they have accomplished is impoverished its economy and lost all benefits from before, while holding the same obligations.

Oh you want to come back? No problem, say hello to the euro, which is a condition for new member states.

You would like to keep EU financial passports? Why would you get them back? Frankfurt is too busy counting all the money they will be making from financial currents transferring to Germany to bother with you.

The University has run out of paper forms for EU passports. Dozens of EU staff have already handed in their notices in some departments. And this is the second richest University in the world.

And then there are people who were saying that this referendum was not legally binding. It does not fucking matter, don’t you see? The damage to the UK economy has already happened and is continuing to happen. Even if they overthrow it right now, the foreign companies will still leave. Who wants to stay in a country this unstable? They do not trust England any more. The concessions that EU has been giving to the UK and the better terms they have been enjoying are gone. The ratings have been downgraded and will be downgraded further.

This is a total clusterfuck.

Addendum: In a part of Cambridge, in the Polish community, people have been receiving leaflets which state that the “Polish vermin” should now leave. Germany could have used you in the second world war, England. Next time, don’t wait 60 years to blame the Poles.

We'll do this later
View all posts by David Modic (admin) →
This entry was posted in ENG, gospodarstvo, work. Bookmark the permalink.