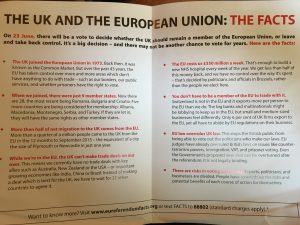 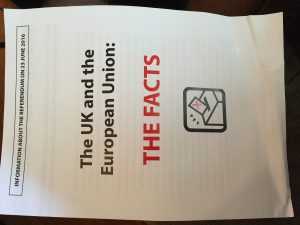 OK, let’s talk about Brexit. I have only peripherally been following this overly politicized storm in a tea cup. It is not that I think it is impossible for Britain to shoot itself in the foot and “leave”. I guess it is possible, but I have some remnants of faith in the preservation instincts of the Brits. The campaign that is in full swing is rife with manipulations. And this is what bugs me.

A leaflet was recently delivered to my door, called: The UK and the European Union: THE FACTS (see image). I naively opened it, expecting to find said facts. They are sadly absent or twisted. It is not clear who wrote this piece of garbage – it seems that the authors would prefer to not be labelled racist bigots, so they stayed anonymous.

First there is a veiled appeal of telling us how when EU started, there were only 9 states, proud and tall, but now there are 28, full of riffraff and uncivilised savages. They do not come out and say it, no, what they say is that in the next round “[…]Macedonia, Montenegro, Serbia, and Turkey [will be considered for membership]”. And then they say: [sic] “If they are let in, they will have the same rights as other member states.”

(1) Heh. I have a hard time imagining that the authors think that right now all the member states have the same rights. If they do believe that, they are divorced from reality. Yeah, sure, Croatian minister of finance has exactly as much sway as the German one in deciding policy, riiiight. Or the Greeks, or Italians or Hungarians, they have exactly as much say right now as, say, Britain or France. Even now, the EU is not a union of equal states. Come on, wake up and smell the coffee.

(2) If we disregard (1), then I am wondering why is it surprising that members of a Union would have equal rights? Is that something that needs to be emphasised in order to scare common folk? Wooo, now a dirty Turk or a lazy Montenegran will be able to decide who to vote for in the European elections and then hope that these people will represent them fairly in the European Parliament. Terrifying, I know.

(3) While England used to own most of the known world at one point in time, the idea of indentured servitude is not as accepted now, as it was then. Your Turkish barber will now have a voice, yes. He is not your bloody slave. Rest easy, you will still be able to hire Brazilian maids even if South-Europeans will suddenly need to be treated like people.

I won’t go into every paragraph of this bumpf. Will just comment on a few more.

250.000 people in a year! In a population of 60+ million. Assuming the English stop reproducing now, they will be extinct in only 240 years! The bloody foreigners are stealing our jobs! Taking our women.

I can understand that people would prefer the competition to be eliminated by any means necessary. After all, who do these foreigners think they are? We have enough nuclear physicists, we don’t need any more. Do you? Sure about that? Do you realize that even when you stop training nurses for five years, people will still need them in the coming years, but they may be French now? There is an assumption that if only the pesky Europeans would not come, then everyone will have a job, regardless of their level of incompetence.
“The EU costs us 350 million GBP a week”.
First of all, [citation needed]! How did they come up with this number? Is there a person who knows how much money is actually going to EU and what does this entail? It seems to me as if this was fairly rule of thumb back of napkin calculation, that gets worse later in the text.

(1) It is almost as if the authors are suggesting that if we leave the EU, the money left over will be used for building hospitals. Come on, don’t embarrass yourselves, or me. Stop pretending that the money going to the EU now, will later be magically re-purposed to help out the poor and needy. Also, does England need 50+ new hospitals in a year? Who will staff them? That’s right, the pesky trained foreigners, because you managed to screw up the NHS.

We get less than half of this money back, and we have no control over the way it’s spent […]

We have not even started with the issue of the UK breaking up. England may want to leave, but Scotland would probably want to stay in the EU. Here is an interesting article on this from the Salon.

You see, the problem here is also the one that happens in large families. Those of you who come from such families know – it is fine for siblings to cross over the nuclear line at will and massacre each other, but god forbid that an outsider would talk shit about their family. Britain “leaves” and it is not rid of the unsophisticated and stinky brother in law, they are just not allowed to talk shit about him anymore.

The island will physically not move, let’s be clear. There may be a divorce but the other aggrieved party will not stop existing. First, there will be a fight over the spoils, which will simply mean:

(a) Customs fees and that will hurt the UK more than it will hurt Europe. After all, what has Britain got to offer as an export that is quintessentially British? People do not buy many Astons and the bananas are dying out anyway. The steel industry is screwed and many of the UK industry giants are not owned by the British any more. The UK pensioners who buy prime real estate in Europe do not count as an export good.

(b) These “ex-pats” all of a sudden will not be European citizens any more. This will be a lot of fun, when all of a sudden they will need to secure citizenship to own real estate in Europe. I am gleefully looking forward to those buying real estate in Slovenia having to pass a language exam (the link is in Slovene, but don’t worry, you’ll need to learn the language anyway as one of the citizenship requirements of showing your dedication to your new Motherland). I can still remember how difficult it was to buy property as a foreigner in Europe, before the Union. Have fun guys and girls. You should especially enjoy the point in time where all your real estate contracts get voided, because you cannot own stuff in Europe any more and the local authorities come with bulldozers to tear down illegal housing. Think I am making this up? It has happened before. My family (who are not Croats) still owns a piece of Croatia coastline where a luxury hotel is now partially built on. The land was seized and our vacation home bulldozed. You are saying this cannot happen in Europe, because it is too civilized? I have two words for you: Syrian Refugees. Still think Europe is friendly to foreigners? Especially after they spat all over it, like you are doing right now.

(c) For centuries now, England has been the centre of academic excellence. In the last decades the tuition fees have gone up, and they have always been double for international students. So, bright Europeans were incentivised to come to England by having to pay “only” domestic tuition fees. The brightest stayed and were offered jobs. If the fees are suddenly doubled (amounting to about 20,000 GBP per year + living expenses), people will be sad but not for long, as there is also Bologna, Sorbonne, Max Planck Institute and many others. Well, these institutions might be slightly less shiny than, say, Cambridge, but they are about 20,000 times cheaper too. So while academics have profited from having access to outstanding institutions steeped in tradition and research excellence, these institutions have also benefited from having the brightest minds in the world at their disposal. This will peter off with Brexit. Have fun keeping up with the rest of the world. To be clear, there are very few English PhD students and postdocs, comparatively. By the time they get to the PhD level they are so far in debt that they figure they’ll work a bit, pay of some of the student loans, and maybe do a PhD later. Most then realize that having a living wage is hard to give up and don’t come back. So, England, you will be driving away the brightest academics and will be left with a lack in the end which will lead into declining research output and into a slide in the world rankings. And then for new academics, Bologna and Berlin will start looking more and more enticing – cheaper and now also academically comparable.

I am in a bizarre position where I am defending EU, although I think the bureaucrats in Brussels have made some very questionable decisions lately and am, frankly, all for destruction of EU in the present form. It does not stand for what I stand for – I do not believe in the same gods they do. I do not worship at the shrine of austerity and I do not accept that since someone decided to play fast and loose with everyone’s money, the taxpayers are now to blame for this. I do not believe that people should be turned away at the door, because they are less fortunate than me. I’d much rather pay for a refugee shelter than for some hedge fund manager’s fuck-up, especially since I am not at all convinced that this wasn’t the plan from the start, i.e. to gamble, and if profits are realized, well, good for the banks, and if they screw up, the people will bail them out.

Thus I find myself in this weird position defending the EU. And I am doing it, not because the EU needs saving, but because I think this pamphlet is such a blatant attempt at manipulation that I am offended by it. If England decides to leave, fine, but they should decide on the basis of facts, not “facts”. I don’t really have a horse in this race in the sense that I am already a resident and probably my rights will not be taken away, so on one hand, I could actually profit from less competition. On the other hand, travel would be more difficult, and England would falter financially.  And that would suck for my standard too.

We'll do this later
View all posts by David Modic (admin) →
This entry was posted in ENG, Politika. Bookmark the permalink.