About amateur psychotherapy and support groups 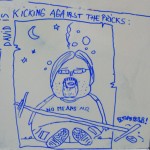 I am participating in a longish discussion in a forum, where one of the things said made me write about something I’ve been upset about for a while now [things in brackets changed by me].

… I am not talking about this [support group], cause it is different, but most seem to be stuck in their own feeling of being right and know how support has to be given. Isn’t it true that amateur psychologists cause more harm then good?

As far as amateur psychologists/therapists go, that is my pet peeve anyway and in general.

I have no issue with either support or self-help groups, but when the line between support and therapy blurs, then I do have an issue, yes. I have an even bigger issue with friendly advice, mainly because I did work both in a psychiatric institution and in a private setting, and my experience is that the client/patient usually gets screwed by inexpert help.

Once the situation is really dire, they come to people like me, who face a lot more work in helping to fix the things that were relatively easily fixable before the person followed well-meaning, but nevertheless wrong, advice.

Sometimes, things are not satisfactorily fixable after the fact at all (for example somebody who is slowly drifting into psychosis and is told that they should really stand up for themselves and understand that as a permission to beat her children to the point where it leaves lasting marks, because they didn’t want to go to sleep at bedtime. If you don’t understand how the mind works, don’t mess with it, is what I am saying. Funnily enough, at that point, people who were full of advice before suddenly go quiet and stop answering calls. And then to my everlasting joy, I get to speak to the mother in a psychiatric clinic and explain to them why they’ll be staying with us, and why that nice person from social services is taking the kids away for good).

Now, don’t start with victim blaming (i.e. the mother is crazy, she should be locked up. Poor kids.).  This is all solvable in a way where the kids don’t get hurt and don’t lose their mother in the process (which in turn doesn’t leave them an impression that it’s their fault that they can’t stay with their mother anymore).

You see, there are two points where friendly advice can fail – 1) when the person giving the advice has no experience whatsoever with what they are dealing with, and just play it by heart, which may work for them personally, but certainly doesn’t work for everybody. They might also mistake their personal experience with a certain issue to be grounds for a good general advice (e.g. if you are quite timid and have once in your life stood up for yourself to a great outcome, you still shouldn’t encourage a serial rapist to not listen to anyone else and just follow their heart).

And 2) (connected to the first one), when the advice giver fails to see the warning signs or misinterprets them because they judge everybody to be just like them.

Both of those sometimes work OK and leave no outward damage which in turn empowers the person to fancy themselves the go-to mental guru, so to speak (i.e. if you have a problem, just talk to me, everybody else does it). This might work for a while, but there will certainly come a point when people are out of their depth (which also happens to ‘real’ therapists, don’t get me wrong, but at least we have any numbers of external mechanisms to help us cope. And, quite importantly, we are equipped to recognize this, when it happens).

Once out of their depth, people either shy away from the problem, leaving the client/patient to pick up the pieces (bad), or steam-roller on, into the unknown, after all how bad could it be, right? (worse).

Well, it can be as bad as you can imagine and then some more. Mainly because if a lay person can actually imagine it and still goes ahead with it, they are probably a psychopath (i.e. don’t care if somebody else suffers. Might also enjoy it. Same applies for being overconfident – it is easy to be overconfident about somebody else’s future. If it works, then fine, if it doesn’t, well, they’ll face the consequences, is also an anti-social trait).

Let me point out that, like I said before, I think that there is a real need for support and self-help groups out there, but there is also a responsibility attached to offering that kind of service, one that shouldn’t be brushed away.

I would say that the main function of such groups is to listen. Offering an opinion is also fine, sharing of experiences too. Lay therapy, absolutely not. I am saying that it is OK to say: “That sucks. I experienced a similar thing – here is what happened to me.” In my opinion is also still OK to say: “Now here is how I dealt with it, but please bear in mind that this might not work for you and that I am not saying you should do any of this. I am merely telling you what worked for me. If you want to follow any of this, please talk it over with somebody who is a) uninvolved, and b) knows how to deal with those kinds of issues. It certainly helped me to do it. A phone number of somebody, whom I had previous good experiences with, is in your mailbox”.

It is definitely NOT OK to say: “Wow, that sucks, and here is what you should do…” or “Mhm, sure, sure, let me tell you what your problem is…” or “Stop talking, nobody cares. Let me tell you a real story of hardship now” or “You fool, it is all your fault, stop whining and get a life” or”You handled it all wrong, here is what you should have done…”

We'll do this later
View all posts by David Modic (admin) →
This entry was posted in ENG, PITA, work. Bookmark the permalink.

2 Responses to About amateur psychotherapy and support groups