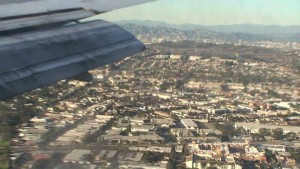 I wrote this on a trans-Atlantic flight several years ago. I just came across it and thought I’d put it here. DM

I am on this flight to L.A. and it is taking a while. 10.000 mile flights do.  A girl is sitting next to me. She is asleep. She was sort of scrounched on her seat and couldn’t help but lean on me a bit. This is natural, and to tell you the truth, quite nice. It makes me feel good for providing a small measure of comfort. I would tell her that she is welcome to lean on me, but that is of course not the done thing. From this, perhaps nice although impersonal guy sitting next to her, I would possibly turn (in her eyes) into a… I don’t know what I would turn into, but there is a huge chance that the rest of the flight might go down awkwardly if I showed any kind of kindness. I mean, she used a wet wipe to clear her table before she put her lunch tray on it. I don’t think she would appreciate a permanent contact with a stranger who has not been wiped down with a wet towellete, and who would possibly take offence is she tried to wipe him clean, before leaning on him.

No, this is the safe route. Pretend that our bodies are not touching and studiously ignore each other. What could be more natural than that? Somebody invades your personal space as you do theirs, for twelve hours, and the convention is that you pretend that what is happening, actually isn’t. And nothing actually is happening, just two people sitting next to each other, who might get to know each other or not. I do not know anything about this girl – I’ll call her Shrestha, for she seems Indian (or possibly Pakistani or Egyptian, I am not too good with geographical placement according to skin color) and I had an Indian primary school friend whose name was Shrestha.

I don’t know about Shrestha, but I have places to go and people to see and in a way if she does not provide any sort of useful info to satisfy my curiosity, then, I’ll just assume she has stuff to do too and make up what it is. I have to spend about seven more hours with her, after all. I assume three possible scenarios –

(a) She wants to make it big in the film industry and is following her dreams. That makes sense only in a jaded romantic way, and if she is Indian, then Bollywood is much closer and also she might only need to screw Indian people to get parts, whereas in L.A. … Also, possibly, the competition is greater in L.A. I don’t know. … I think this is possibly not the reason for her flight.

(b) She could be a student, although, I would assume not post-grad. I would say Shrestha is in her early to mid twenties, so I guess a post-grad is possible but only barely. Attending UCLA? Kinda doubt it – humanities seem more her style. Her hands are painted, she reads lifestyle magazines. The kind about celebrities.

(c) She is going on a trip of a lifetime, just travelling around, seeing the world. That is feasible. But then, I wonder, is there a love story underneath? Is there a white boy she met in a little village where she is from and spent an unforgettable fortnight with him under the Indian sun? And then the boy who is a son of a senator needed to fly back to his parents, his career and his aristo white WASP girlfriend, whom Shrestha knows nothing about; leaving her behind. And did she write to him, and did he reply? Or did he sort of assume that what happens in Bangalore, stays in Bangalore? Did he tell her one hot spring night that she should come to L.A. and be with him forever? Did he mean it, or just thought that he will get lucky again that evening if he said the right words? I know the bogus stuff I said to summer romance girls, so this is not out of the question. So many unknowns. Did he tell her that she should come and she believed him? Is she flying in blind or does he know she is coming? Will he be there at the airport? I’ll see. I kinda assume we’ll get lost in the shuffle once we land, but I’ll keep a lookout. You see, my problem is that I am a romantic at heart. But, for a great romance you also need a twist, an unwilling protagonist. Otherwise the three sentence structure (i.e. Romeo and Juliet  – Boy meets girls. Boy gets girl. Boy loses girl.), just becomes one sentence story. Boy gets girl. There is no drama there.

So, I am assuming that Shrestha is not pedestrian, she is not run of the mill. She deserves drama. She is Herencia (the movie) kind of girl. If I have to hazard a guess, which I think I very probably will have to do, then I would say that the boy will not be at the airport. He possibly didn’t tell Shrestha his contact details, so she is coming to L.A., a geographic area the size of a small European country, with 10 million inhabitants to find him. Perhaps he attends UCLA? I would think, though, that at the moment it is the Summer break? I don’t know enough about U.S. academia, can’t be bothered to find out and have no Internet access. I am on a plane, remember? Shrestha is sitting next to me.

So, while it gives me no pleasure to say this, I think, that things will not go according to plan – Shrestha will grab a cab or whatever to the campus, she will find Otis (let’s call him Otis), who will no doubt be surprised, but possibly not ecstatic to see her. She will not be able to sleep in his dorm, he will strenously advise her not to sleep in his frat house, because he saw a couple of brothers checking her out, when they went for a coffee (anything to get her out of the room). And, while Otis might be many things, he is not a pimp yet. So Shrestha is out on her own. It is evening and as Tom Waits says, there is nothing that Hollywood loves more than the taste of sweet little dreams and pretty blue wishes.

I mean what the hell? What is going on inside our minds? We are just little creatures industriously crawling from one continent to another and back. In my case, I am spending 24 hours on the planes in the next three freaking days. We spend inordinate amounts of time simply passing each other by. We are all shy, all herd creatures, who would mostly prefer not to spend time in a herd, although we would be sad and alone if we were isolated.

Shrestha is now elbow-touching me. She is still asleep. Sweet dreams.

I have covertly read the imigration card Shrestha was filling out – she is 25 years old, she lives in India and her name is not Shrestha. I was still slightly on the money, though 🙂
.

We'll do this later
View all posts by David Modic (admin) →
This entry was posted in ENG, Uncategorized. Bookmark the permalink.