The need for a centralised ID?

[…]For those who do not want to read through all 12 pages of the thread to understand what this blog post is about, here is a brief synopsis:  A poster asked why we did not provide audio support over DisplayPort connections. I answered the question. People were not happy with that answer. Mark Hopkins kindly agreed to search again and spent a lot of time polling our engineers. He came up with essentially the same answer. Despite hours of diligent research, there are those who still think that Lenovo is not being truthful.

[…] Here’s my answer to take a step in the right direction. Set up a centralized online ID registration and clearinghouse. To sign up, you must provide a driver’s license or passport to prove you are who you say you are. At that point, you are assigned an online ID that has your name and picture (from your passport/driver’s license) associated with your profile. The rest of your personally identifiable information is immediately destroyed. You use this common ID for ALL forums, boards, and blogs that you are a member of – whether it is a vendor’s forum or a blog about coffee brewing methods during the Medieval time period.

After your centralized online ID is created, you start to establish credibility. Using the Reddit “vote up/down” or Amazon 5 star model, following each post on any online forum, people have the opportunity to vote your credibility and helpfulness up or down. 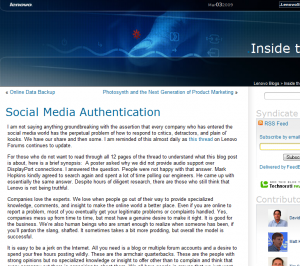 Hi,
I’ve been a long time reader of the site and have owned several thinkpads over the years (I type this from my x300). I have never before commented on anything as I felt I was perhaps not best qualified or didn’t feel strongly enough about that particular topic. However, this topic is right up my alley – closely connected to my PhD and masters thesis.

The problems with the proposed as I see it are those:

First of all there is no disputing that defining virtual identity is a hard task and that some virtual inhabitants will abuse the privileges of anonymity. This is not something I would wish to contend. However, connecting a RL person to their posts is not all that straightforward nor very simple.

a) There is more to someones identity than their name and picture. For instance, there are academic and professional credentials to think of. Posts on the Internet are by definition merit based (meaning – it doesn’t matter who you are, as long as what you say makes sense or resonates with someone), which is not truly compatible with requiring credentials from a person. On the other hand, somebody who spent time and energy in a chosen field should probably have a more weighted opinion if you insist on identifying him/her. Let’s not get into the consequences of what would happen if Steve Jobs or Bill Gates would participate in a particular forum. Should their opinons matter? Certainly. Would people react to what they represent and not to what they say? They probably would. Is it then OK to deny them participation in online communities just because replies to their opinions would be biased? No. I am sure you can further develop this argument on your own.

b) The identity is also fluid, not rigid. The idea that if somebody’s opinon has to follow them for the rest of their online life is perhaps too harsh. Especially if it’s in highly contentious, individualistic field. Think about it – let’s say we create global identities and Joe the user posts in a motorcycle forum (since I ride a bike and used to be a moderator in a huge biker’s forum I have some knowledge about that and thus use this as an example) – he loves his bike (as you would) and is certain that every other bike on this earth is a piece of c*ap. Let’s say he is 18 years old and perhaps brasher than neccessary. He makes his opinion widely known and most of other forum users tag him as stupid and unreliable (for they also love their brand of bikes). I mean, he is opinionated, but he’s young. His credibility is more or less shot to h*ll. Why should his individual opinion of superiority of his bike impact credibility of his thoughts on global warming or pancake recipes? So there are two dimensions to his identity – chronological – his opinion might change, and social – his identity is different according to context. You shouldn’t judge globally.

c) Social identity theory would tell you that people will try to conform in a group in order to be accepted. What you get from this, if they are identifiable is a homogenous group, which you might not really want – if the general opinion in a certain forum is that for instance Thinkpads are the best thing since sliced bread and lenovo can’t do wrong you would get people who agreed because they wanted to belong not because they genuinely thought so. This would not translate into sales – if everybody agrees that something I perceive as wrong is actually perfectly right, you tend to leave if there are no consequences. Which means that people who stayed in that fictitious forums would all agree on greatness of something but people who left would not buy it. And not neccessarily people who spoke in superlatives would actually buy the product. this ties in to another difficulty –

d) The unpopular opinions would not be heard. If an opinion is unpopular that doesn’t neccesarily mean it’s wrong. There are again several aspects of this – There are relatively few opinons that are perceived the same everywhere. Let me be a little provocative now – Iran goverment has repeatedly stated that the Holocaust has not happened. Appearing in an Iranian forum and talking about the consequences of Holocaust might not be (excuse the pun) kosher. This might lead to a sharp decline in global rating. Conversely going to an Israeli forum and comapring murders in Gaza with the holocaust would not boost your ratings.

e) If somebody for any reason lost credibility (for instance if his identity was hijacked. It doesn’t have to be his fault) that would be it – How can you prove that you were a victim in a situation where nobody believes you anymore? This problem already became apparent on Usenet years ago, where people added others to their kill-list if they trolled too much, but if then became apparent that the poster’s identity was hijacked, everybody already ignored their posts.

f) A chance of abuse is far greater when the data is centralised.

I would love to go into more detail (there’s much more) but don’t want to lecture an empty room, so to speak :).

I realise I posted late and suppose I just wasted a lot of time on a topic which nobody reads any more.

I apologise for any grammatical errors in my post. English is not my first language and I didn’t run this through a spellchecker.

RMH, David (and it is my real name, see, no need for global overseers 🙂 )

We'll do this later
View all posts by David Modic (admin) →
This entry was posted in ENG, IT. Bookmark the permalink.