The resurrection of bigotry; and naiveté of the left wing 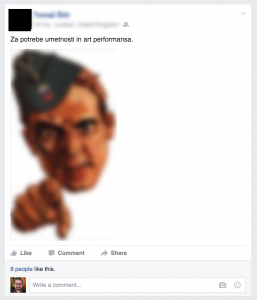 This is a Home Guard (Slovene nazi collaborators) recruitment poster image, that is now being shared on Facebook to gain support for anti-immigration movement. The OP says: “For the cultural purposes and art performance”. The original post is not as blurry as this one, but I will not enable these people.

I have been thinking about this for a while now. I keep getting exposed to vile facebook posts from sad specimens of human race, who try to disguise their smallness behind ideology and in the same breath try to convince me that I am blinded by my own beliefs. Well, at least I am honest to myself and others about my beliefs. I do not pretend to be something in order to achieve something else.

I feel sullied when I see posts that attempt to revive Slovene Home Guard (nazi collaborators) imagery in order to serve some petty gain.

There is a “big” issue in Slovenia with Syrian refugees and there are demonstrations where people are sporting placards with nazi emblems. The government does nothing, but I, sadly, didn’t expect them to. There is too much deer-in-headlights attitude for comfort, but hey, I suppose keeping your cushy job and putting your cronies on boards of companies has to take priority. The argument that crony capitalism is what the left is always doing in Slovenia is kinda broken, mostly because the ruling party is not actually left wing when we see their attitudes to issues that usually determine political polarity (i.e. stance on abortion, LGBT, religion, unions, working conditions, austerity measures etc). This is not the point of my post, though.

The background is that the plagiarist [SLO link], semi-fresh out of prison, would like to get some power back and thus uses base instincts to incite unrest. Refugees are an issue that he picked – he is, of course, cloaking it as loyalism to Slovenia and its citizens. He gets his flunkies to post stories about how refugees are getting 800+ EUR per month each (here [in Slovene]) which is more than the average monthly pension in Slovenia. This amount comes from some plucked-out-of-thin-air maths – the Slovene minister of finance says that each officially recognized refugee in Slovenia costs 10,000 EUR per year (transcript of the salient session of Slovene Parliament. [In Slovene]), which was then divided by 12 into a monthly sum by the flunkies, not taking into account accommodation costs, infrastructure costs, costs imposed on the police, military, health system, schools etc. In reality, officially recognised asylum seekers get 18 EUR per month allowance and there is less than 10 of them from Syria (90 has asked for asylum in 2015). The migrants get nothing. Surely, we are human enough to not worry about people who lost everything, getting no stipend, although they might get a hot meal from us every once in a while.

The general population, being squeezed and rapidly finding itself below the poverty line is incensed. They feel screwed (which they are, but not because of the migrant issue) and blame the refugees, not the politicians who got them there. They organise protests and basically turn to neo-nazi ideology, rationalising their choices by pretending to care about others, or pretending that being a human being is somehow opt-in (“Anybody who wants to pay for them can, but leave me out of it. I’ll help when I decide, not when there is a need” Copious examples here, for example. Not for the faint of heart. [In Slovenian]).

The sad part is that this is supported by some of the so called Slovene neo-liberals. Why do I say so-called? Well, because the refugees and asylum seekers are mostly supported by cash injections from the EU and UNHCR. Which means that the money is coming from the outside and through refugees gets injected into the local economy. Why is it then that the neo-liberals oppose getting money into the market and allowing said market greater freedom of movement; and higher levels of enterprise? Surely it is better for economic cycle to run, than stall? It costs the Slovene taxpayers nothing and even in the myopic libertarian prism of taking care of oneself and screw everybody else, this is a net positive. Simply put, if you lose nothing and increase turn-around in the markets, which could benefit you in the long run, why not support this?

Because this is not about being a libertarian. This is about having a grudge, and about blindness framed as libertarianism. This is kinda sad. I violently disagree with ideas some of my Facebook “friends” are spewing, but at least, up to this point, I believed that they themselves believed their own ideology. While I disagreed, I was willing to accept that opinions differ and respect, to a certain extent, our differences. Now, since I see that they don’t even believe in their own bullshit, only abuse it to rationalise their own smallness, it is kinda pointless. It is, basically, not worth my time to argue with a person who is so fundamentally flawed that they either (a) know that they are just grasping at anything that lets them keep their bigoted preconceptions and still let them sleep at night or (b) have managed to convince themselves that they actually do follow an ideology and not even realise that they are spitting in its face.

This is what it comes to, again and again. The division is not, fundamentally, between left or right wing politics. It is about framing the world. There are those of us who reject the concept of extreme individualism and social isolation as the only way a person may live. I am not about to analyse people who believe in that. I am sure that they have their reasons and their traumas resulting in this outlook. What I will say is that I think (supported by empirical fact) that this is not the only viewpoint one may have and that widening one’s horizons may be beneficial. What I am saying is that those who believe that the world is a cold place that only rewards solo effort and screw the rest are depriving themselves of a whole host of experiences that are out there. Our conflict rests in the fact that I understand that there are those who believe that the only measure of achievement is dependent on egotism, but disagree with that viewpoint; and they do not seem to understand that their premise is not the only one there is. So, conversation is difficult. Especially when these people resort to name calling and telling me how blinded I am to the only gospel truth. It is not that I refuse to see it, I refuse to accept it as the only true path to enlightenment. From my perspective these people are blinded by building on false premises. In the end this becomes the lowest form of a religious debate. “This is the truth, a man is a wolf to another man!,” they say. And I say: “I disagree.” To which the response is, more often than not, a putdown. It is frustrating and unnecessary. In my experience people often stop talking not because they are convinced, but because they find it difficult to excuse spending time on an unproductive debate. Only a fool walks from such a conversation thinking that they won, because the other has stopped arguing.

Whenever there is an argument with libertarians because of some racist, homophobic or misogynistic crap that they vomit, the final argument usually is that we, lefties, should just grow a pair and not be so thin skinned. This actually upsets me more than the previous offensive remarks. I so want to say: “You think I am upset? You haven’t actually seen me upset.” The argument that it is all a bit of fun when someone proposes that the red garbage like me should be taken to the woods and shot, or that every muslim is a terrorist, or that women who seek artificial insemination just haven’t been screwed properly by a real man, is insulting to my intelligence. Sure, the real problem here is me, because I cannot take a joke.

The other misguided idea is that there should be balance and that everybody should have their say in order to weigh arguments. There are any number of rebuttals for this, for example John Oliver: Debate on Climate Change. But we as more left leaning individuals are supposed to entertain bullshit, because this leads to openness and inclusivity. This is a total fallacy. I would listen to arguments against my position if they were not absolutely insane and completely unsupported. “No, no, let the other side speak.” Why? There is nothing to be gained by listening to a rabid chinchilla masquerading as a human being. Why would I even entertain someone who is not interested in discussion but only in a platform enabling them to vomit their bigotry on others? The point of discussion is to exchange views based on reality not in using others to provide you with a soapbox giving legitimacy to your irrational ramblings.

The favourite argument of rabid fanatics here is that by doing this the commies show their true intolerant colours. Only now? I don’t pretend to speak for society at large, but as far as I am concerned, I have indulged your petty self-pity that is not based in reality for long enough. Prove to me that you are worth listening to, first. My time is far too precious to indulge in some pathetic bullshit wrapped in the cellophane of reasonableness in order to feed the goal of inclusiveness. In the words of Robin Williams, quoting Oliver Sacks: “I am sorry. I would agree with you, if you were right.” This poisoning of the common well has gone long enough. And I will happily agree in advance with those who tell me that I am intolerant of bullshit and that I am too egotistic because I value myself too much to be at the disposal of those whose only plan is to use and discard me.

Note. In case you were wondering, the original images on this page are not blurred, but I do not want help the cause of neo-nazis.

We'll do this later
View all posts by David Modic (admin) →
This entry was posted in SLO. Bookmark the permalink.